As Co-Founder and CEO of online design platform Canva, Melanie Perkins heads up one of Australia’s fastest-growing start-ups that now serves over 15 million users a month across 190 countries. But, says Melanie, this is just the beginning. Picture this: Melanie Perkins – a 19-year-old university student – decides to take over her mum’s lounge room in Perth. She’s had an idea. It’s a big one. She intends to make it a reality. With no money to rent office space, her mum’s carpeted floor will have to do.

As a commerce and communications degree student at the University of Western Australia, she’s frustrated by the lack of user-friendly tools available to complete everyday graphic design tasks. She and her boyfriend, Cliff Obrecht, decide to develop their own.

From there, they create online design software for the school yearbook market. Fusion Books is born. Five years later, it’s the biggest platform of its kind in Australia and has expanded into New Zealand and France.

Melanie may not have known it then, but the seeds sown in that crowded lounge room with “stuff scattered everywhere” were to blossom into one of Australia’s most successful start-up unicorns ever.

Fast-forward 12 years and I’m sitting in a photographic studio in Sydney’s hip enclave of Surry Hills. It’s a Friday afternoon and there’s a buzz in the air. The photographer and assistant mill around setting up equipment and taking test shots before the ‘talent’ arrives.

“We could go the easy route, or we can go the route that is terrifying, and it’s the terrifying route that usually pays off in the end,” – Melanie Perkins

And then, there she is. No fanfare. No airs and graces. Just a warm, “Hi, I’m Mel.” I look up to see a woman in a simple black jersey dress and black sandals. If it wasn’t for the impressive diamonds in her ears, she could quite easily pass for an intern.

But at 31, this is a woman whose idea to “empower the world to design” has led to more than one billion designs being created, at 33 designs a second. As of October 2019, Canva is worth US$3.2 billion. With figures like these, Melanie could quite frankly have all the fanfare she fancies but, instead, she’s friendly and open as she casually folds herself into the studio’s grey flannel sofas to talk.

Melanie smiles at the mention of Fusion Books for, while lots of teenagers have great ideas, most of them do not have the motivation and determination to follow them through. “Throughout my life, I’ve always put a lot of effort into any single thing that I did,” Melanie explains. 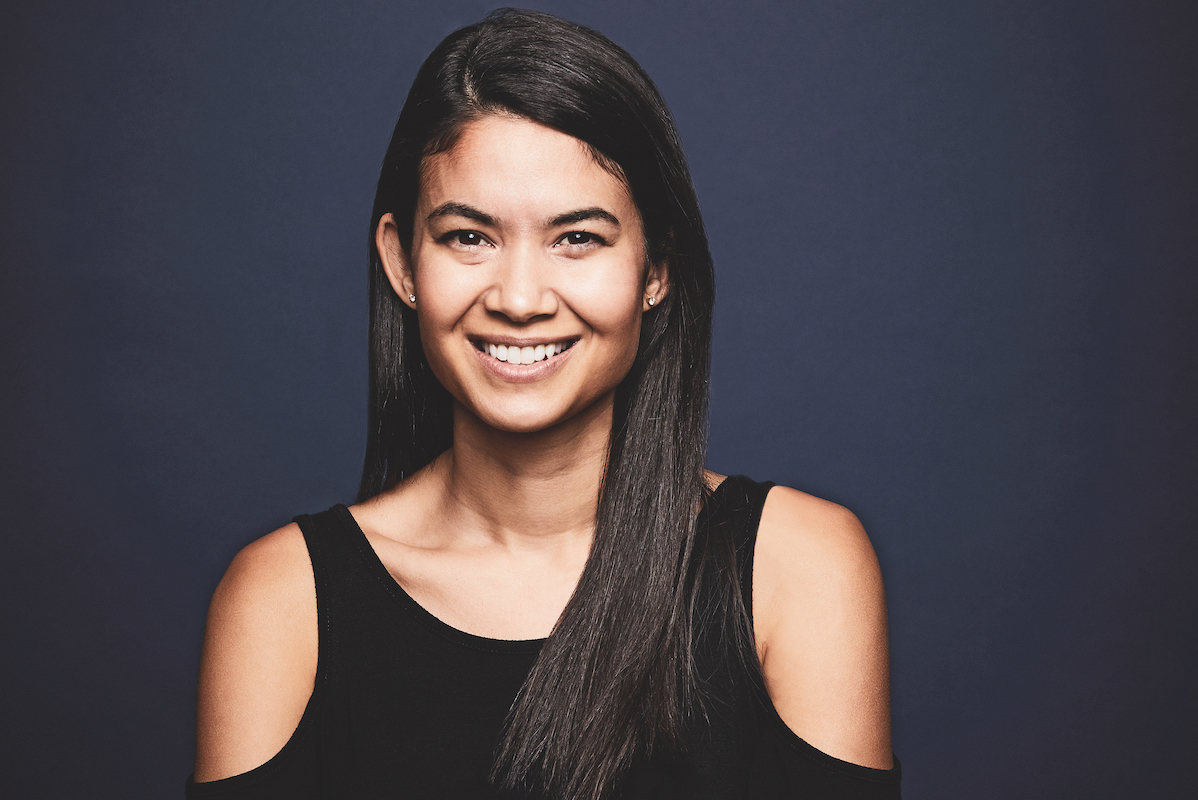 Melanie Perkins and Cliff Obrecht co-founded Canva – one of Australia's most successful start-up unicorns ever.

“That could have been a school assignment or an extracurricular activity. If you can put all your mind and effort into something and then you can see that time and effort and determination equate to success, you’ll be more ready to take bigger and bigger risks.

“Starting the first company, handing over the cheque – which was everything that we’d ever saved and more… I knew that it was the start of a new chapter, because it meant that we had to figure out how to pay that back. Along the way there have been some forks in the road where we could go the easy route, or we can go the route that is terrifying, and it’s the terrifying route that usually pays off in the end.”

Much has been made of Melanie’s youth and gender but that’s something she dismisses easily. “I think there’s probably a lot of emphasis on things that I don’t give a lot of consideration to.”

Dealing with people’s preconceptions is just one of the challenges Melanie has faced during her career, but time has taught her that the challenges don’t get harder, “they’re just different”.

“As a leader, I feel my job is to set the vision and the goals for the company, and then to work with everyone to empower them to dream big and crazy,” – Melanie Perkins

“I feel like the magnitude of the challenges compared to where you are is always astronomical,” she says. “In the start, it was astronomical trying to figure out all the things about starting a company. Now we’ve got 600 people, so there are astronomical challenges trying to make sure that those 600 are all moving towards the one vision, and that the company is structured and set up for success in order to take advantage of the huge opportunity ahead of us.”

Right now, Melanie’s challenge (and the one that’s keeping her awake at night) is how to “go from 18 million users a month to every person on the internet using Canva. How do we go from point A to point B? It’s a question that we’re thinking a lot about.”

For a self-confessed introvert who found networking “pretty daunting” at the start, Melanie’s come a long way. After meeting with Silicon Valley venture capital investor Bill Tai briefly at a Perth conference, she flew to San Francisco at his behest.

“I was absolutely petrified. There aren’t many times in your life that you know that you’re stepping into the next chapter. I had a very visceral reaction. It consumed my entire body.”

That meeting with Tai in a café ended with an introduction to Lars Rasmussen, Co-Founder of Google Maps. The mistress of understatement, Melanie smiles as she says, “I was so nervous, but fortunately that worked out in the end.”

Indeed it did, and Canva launched in 2013 with Melanie and Cliff at the helm, and they were joined by former Google executive Cameron Adams. “I’m determined, stubborn and adventurous,” she says.

“As a leader, I feel my job is to set the vision and the goals for the company, and then to work with everyone to empower them to dream big and crazy. I want to set them up to do the best work of their lives and to achieve those crazy, big goals.”

Fortunately for her team, Melanie has a two-step plan to achieve those “crazy, big goals”. “Step one: build one of the world’s most valuable companies,” she says, ticking them off on her fingers. “Step two: do the most good we can. We’ve started to dabble in step two. We’ve got 25,000 non-profits using our non-profit program now.”

Melanie beams when I ask about the future. “We have such huge aspirations. We’ve done 1% of what’s possible so we’ve still got a lot to do but we celebrate success as we go. When we launched in Spanish, we had a Latino festival. When we released Photos Unlimited, a new product where you get 50 million images, we released doves from the roof of our offices.

“We always make an intentional effort to celebrate the milestone because if we don’t, then we’re always just looking at the top of the mountain.” She pauses. “You know, before we moved into our new offices, it was all, ‘Wow, this is so big’. And I realised we had to fill each floor with our dream. Now, that whole building is overflowing with dreams and ambitions and goals.”

Ruth Devine is an award-winning journalist and, for the past 20 years, has covered everything from news to travel to entertainment in both the UK and Australia. She lives on Sydney’s beautiful Northern Beaches.