Having run for governorship against Arnold Schwarzenegger, founding The Huffington Post, & launching a new health start-up, Arianna Huffington is a wellness warrior with many feathers in her cap.

Having run for governorship against Arnold Schwarzenegger, founding The Huffington Post, & launching a new health start-up, Arianna Huffington is a wellness warrior with many feathers in her cap. 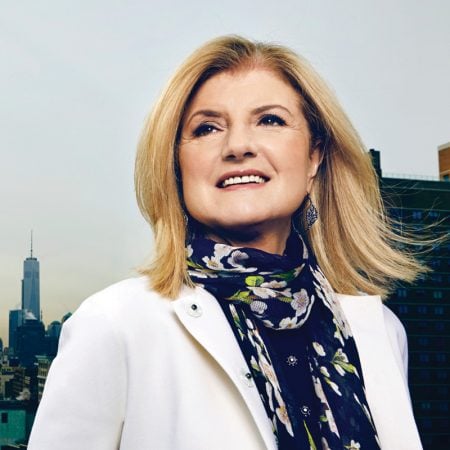 “When I founded The Huffington Post (HuffPost), I was still very much under the delusion that burnout is the price we have to pay for success,” she tells The CEO Magazine. “I thought I had to burn the candle at both ends and – mistakenly – attributed the success of HuffPost to my willingness to do just that.”

The experience left her wondering: was her success achieved because of her willingness to work 18-hour days, 7 days a week, or was it in spite of it? She staunchly believes it was the latter, and set out to radically change her lifestyle, adopting small changes to keep her on track and out of doctors’ waiting rooms.

As part of this realisation, Arianna also changed her definition of success; where before it was measured around traditional metrics of money and power, she now considers a new, third metric – her wellbeing. This would govern the health of her relationships, her willingness to be creative and generous, and the ability to pursue lifelong passions – in short, all the things we celebrate in eulogies, which often don’t mention overtime, higher salaries, or PowerPoint presentations. 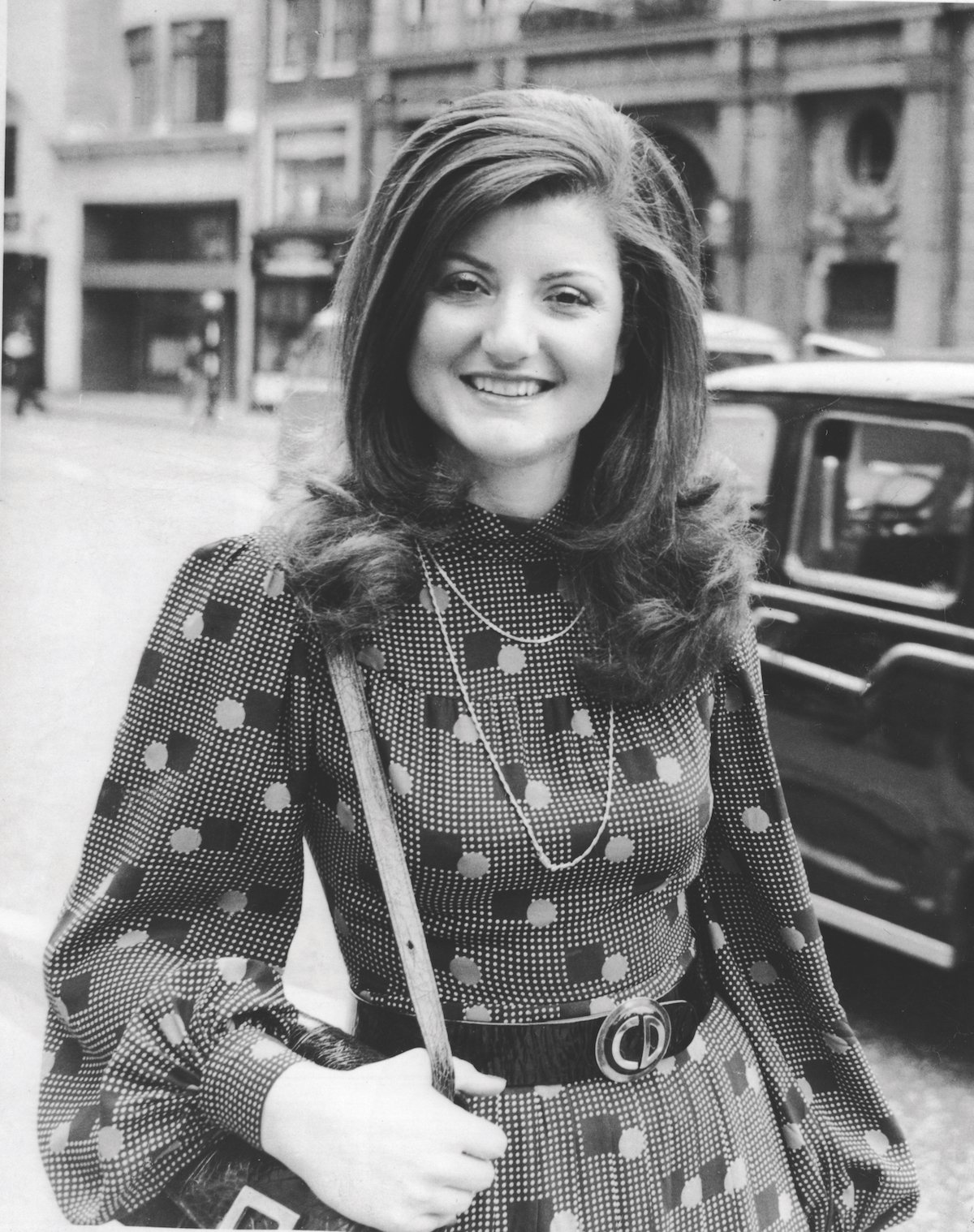 Arianna pictured in Cambridge, England in 1975

“I made a lot of changes to my life, and I also brought policies that reflected the science of wellbeing into HuffPost. Of course, there are obvious challenges in a 24/7 newsroom, but we did a lot to try to prevent burnout,” says Arianna. This started with making it clear that no-one was expected to check their work email outside of working hours, as well as installing 2 nap rooms in the office to help people recharge when needed.

“Right now, our modern definition of success – in which long hours and overwork are taken as proxies for seriousness and dedication – isn’t working. That’s what’s produced our global epidemic of burnout and stress,” she says. “Success isn’t about having to choose between wellbeing and performance; it’s about realising the two are directly connected.”

A few years later, Arianna went on to release her fourteenth and fifteenth books. She detailed her wake-up call and subsequent changes to her life in Thrive, released in 2014. Two years later, she then published The Sleep Revolution, which explores the dangers of the sleep-deprivation crisis, and reveals the science behind the transformative power of sleep.

Arianna tells anyone who’ll listen that the first step she made in achieving a more healthy and balanced life was to make sure she always got at least 7 hours of sleep every night, and says she advises people to “sleep your way to the top.” Although she made some great inroads at HuffPost, around the time of releasing The Sleep Revolution Arianna decided to officially detach herself from running the business to dedicate her full attention to running her new venture, Thrive Global, that not only shares the message of the third metric of success but also values it internally.

“The real key, and one we’ve also now imported into Thrive Global, is to structure the incentives in the right way – to make it very clear that burning yourself out is not celebrated and rewarded,” she says. “[!we!] change the way we work and live by putting into action the growing body of science that shows that when we prioritise our wellbeing, our productivity and creativity go up across the board,” she says.

“The way Thrive Global is redefining success isn’t by asking people to do less of a good job; it’s by giving them the tools to do a better job – and be happier and more fulfilled in the process.” Despite the more recent turn towards the wellness industry, Arianna has always been a crusader for fulfilment, willing to overcome fears and failure if it meant pursuing her passion.

These traits can be traced back to her childhood in Athens when her greatest role model, her mother, taught her the value of taking care of yourself before business, and that “failure isn’t the opposite of success, but a stepping stone.” 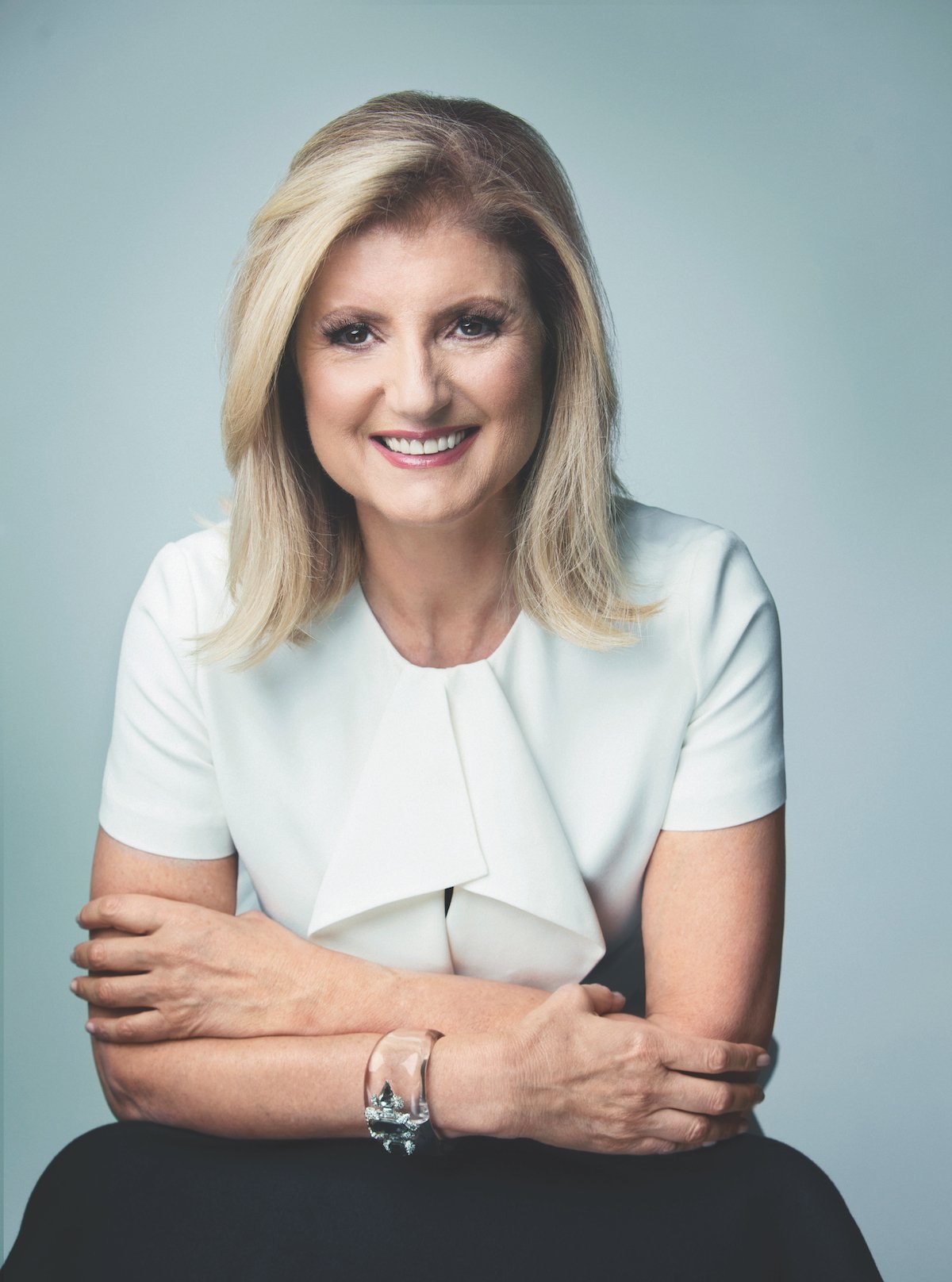 "One of my biggest role models was my mother – her motto was that failure isn’t the opposite of success, but a stepping stone." – Arianna Huffington

Through her mother’s influence, Arianna has regularly demonstrated the benefits of approaching a challenge without being overcome by fear – starting with her days as an economics student at Cambridge University, where Arianna joined the Cambridge Union debating team despite having a thick Greek accent.

In an interview with Glamour magazine, she said, “I fell in love with the spectacle of people’s minds and hearts being moved by words, and I said, ‘I want to do that,’ and I was terrible. When I first stood up to speak, I was literally laughed at – I had to read every word – but I was determined to learn how to speak.” She went on to become the first foreign president of the Cambridge Union.

From there she spent the 70s and 80s featuring in a whole array of different media formats, from appearing as a co-host on late-night television, to writing books and articles, including commentaries on feminism, spirituality, and biographies on Pablo Picasso and Maria Callas. Arianna has even co-written the lyrics of a number by Greek songstress Irene Papas, credited under her maiden name Stassinopoulos.

She first rose to prominence in the US in the 90s after her then husband, republican Michael Huffington, ran for and achieved a seat in the House of Representatives. Arianna quickly became a popular conservative commentator on shows like Comedy Central’s Strange Bedfellows, Politically Incorrect with Bill Maher, and radio show Left, Right & Centre, while also casually appearing as a panelist or actress in various TV and radio productions. 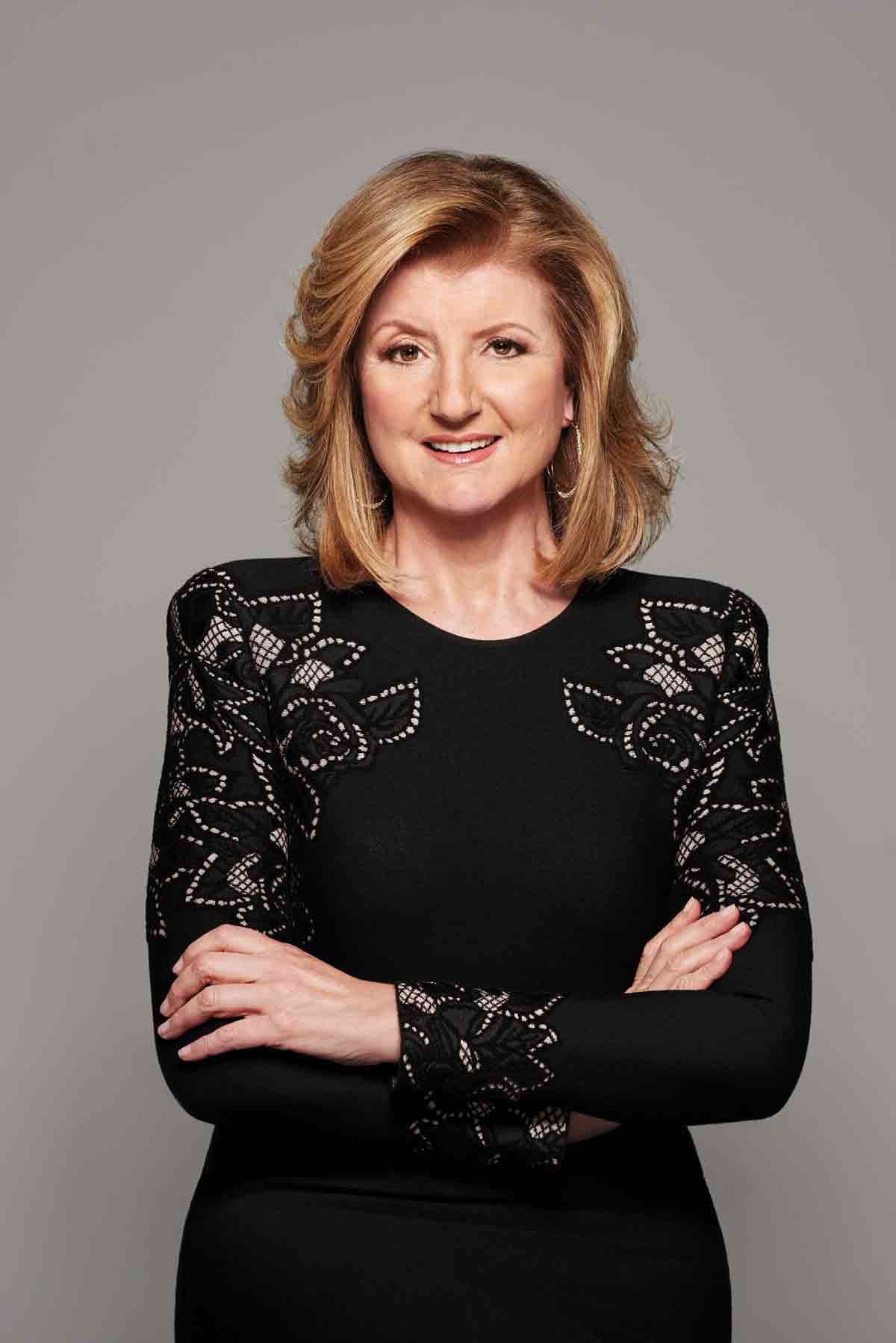 Arianna co-founded The Huffington Post (rebranded as HuffPost in 2017) out of her LA home in 2005, following the re-election of George W Bush, with just 4 others and the vision of a left-leaning aggregation of articles and blog posts from friends. The website grew rapidly, transforming into the major international news outlet and digital media platform it is today, hitting a recent monthly average  of almost 200 million unique visitors across 16 countries.

“As successful as HuffPost became, it didn’t always look that way in the beginning,” she says. “When we debuted, one reviewer wrote that it was ‘the movie equivalent of [!famous!] Gigli, Ishtar and Heaven’s Gate rolled into one’, which I don’t think was a compliment! But fearlessness isn’t about the absence of fear, but mastering it by going on despite it.”

It took only 2 years of growing HuffPost before Arianna experienced her epiphany, which saw her place more focus on her health, as well as the health of her employees. But with this change came no shortage of success. In 2009, she was ranked twelfth in Forbes’s first-ever list of the Most Influential Women in Media.

Following the acquisition of HuffPost in 2011 by AOL, Arianna served as president and editor-in-chief of newly formed The Huffington Post Media Group, responsible for all content across HuffPost and other AOL subsidiary sites. One year later, the Group was awarded a Pulitzer Prize for journalism for its 10-part series Beyond the Battlefield, by military correspondent David Wood. It wasn’t until 2016 that Arianna decided to step down as president and editor-in-chief to work on Thrive Global full time, which came as a shock to a great many in the organisation.

On her departure, she assured them that strong companies always succeed beyond their founder, and that she will still carry on acting as HuffPost’s unofficial Sleep Ombudsman. Thrive Global quickly attracted a slew of high-profile launch partners across the globe, including Accenture, SAP, Airbnb, and Uber. The company comprises its digital media platform, tailored corporate wellness training programs, online mini courses, and an ecommerce operation selling an assortment of items ranging from sleepwear to technology.

Failure isn't the opposite of success, but a stepping stone.

“We’ve hit the ground running; and since the burnout epidemic is global, we too wanted to be global from day one,” says Arianna. “We’re trying to be a sustainable start-up from the beginning. Our goal for our media platform is to become the global hub for the conversation on the latest scientific findings around wellbeing and productivity, and celebrating new role models.”

Arianna says that a key indicator of Thrive Global’s success in accelerating the culture shift is the number of new role models they have been featuring. “This includes Jeff Bezos, who talks about how getting 8 hours of sleep is better for Amazon shareholders; Selena Gomez, who wrote about her experience taking a digital detox; and Andre Iguodala, who revealed the benefits getting more sleep had on his game,” she says.

“It’s a conversation people are hungry for, so we plan to expand our media platform and add thousands more contributors telling their own stories.” Arianna also wants the new company to be a workplace that serves as a role model for the product it’s selling, ensuring flexible working styles, nap pods in the office, and regular in-office massage therapists (a very popular item among employees).

“We also encourage people to let colleagues know when they’re feeling overwhelmed and take time off,” Arianna adds. The company supports small steps of both its clients and its employees to improve self-care, such as getting enough sleep, meditating, and removing smartphones from the bedroom. 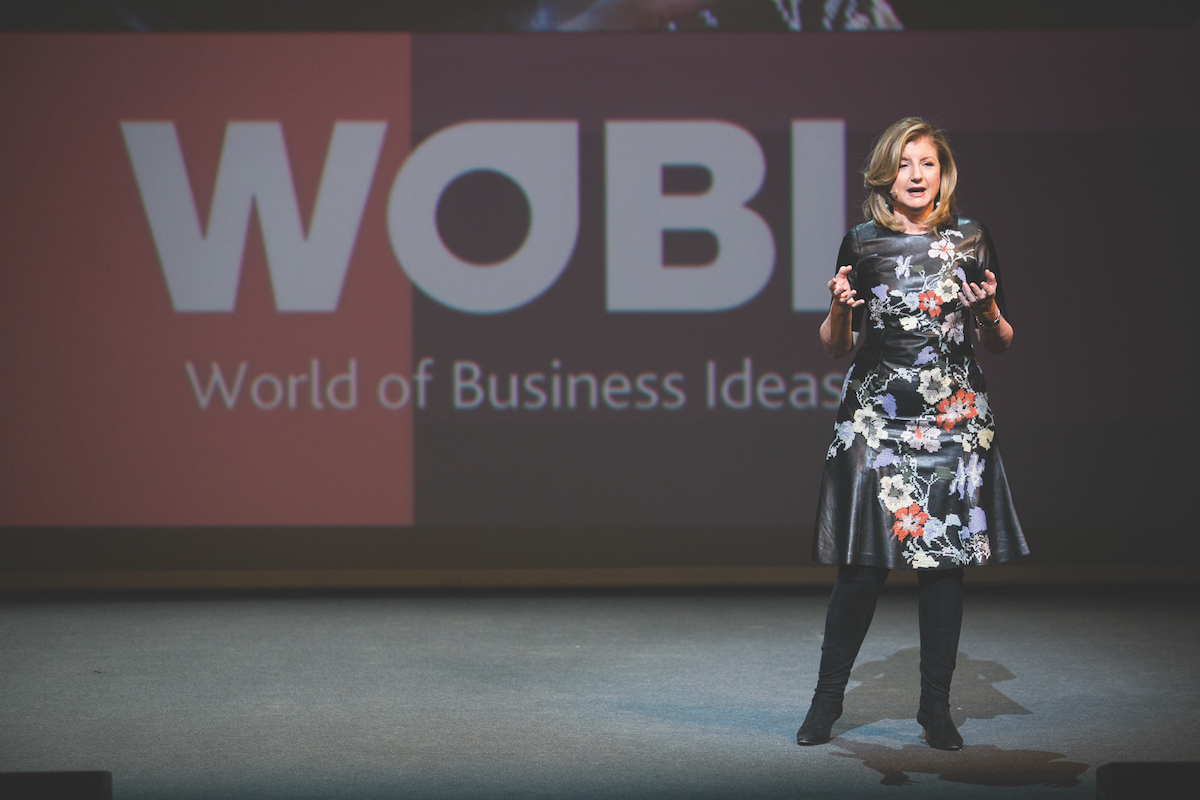 By leaning back, we become much more effective at leaning in, moving forward… taking care of yourself so you can be at your most productive, creative and intuitive.

While Facebook COO Sheryl Sandberg has made prevalent her message to working women that they must ‘lean in’ to opportunity to achieve success, Arianna has alternatively spoken about how ‘leaning back’ can make for wiser leaders. However, this does not contest Sandberg’s message so much as it serves as a precursor. “The concept actually comes from one of my favourite French expressions, ‘reculer pour mieux sauter’, which roughly translates as ‘leaning back to jump higher’. That’s what cats do,” says Arianna.

“By leaning back, we can become much more effective at leaning in, moving forward, and doing what we need to do. It’s a version of, as they tell us on airplanes, putting your own oxygen mask on first – taking care of yourself so you can be at your most productive, creative and intuitive in your relationships with the world.”

Arianna Huffington will be presenting at the World Business Forum Sydney, running from 31 May – 1 June 2017.